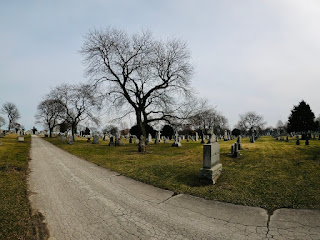 Carol and I walked in the cemetery again yesterday afternoon.  Others have discovered the cemetery too.  We saw a half dozen people there.  Two men walking dogs, one of which was a superb gray greyhound.  I called to the owner, “Your dog is beautiful,” and then because of the way the dog proudly carried himself, “and perhaps he knows it.”  The man laughed and said, “He does.”  A woman was with her young son riding his tricycle.  A middle aged woman walked slowly alone.

The cemetery stretches down to the street that runs along the lakefront.  We crossed and looked at the water for a while. 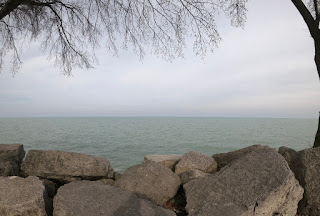 It is strange what the mind does.  That is the fifth biggest lake in the world.  I cannot see the other side, but my mind knows that Michigan is only fifty or sixty miles away.  I do not disparage Lake Michigan.  It is a serious and sometimes dangerous body of water.  I was born in the center of the continent.  I have lived in the Midwest almost half my life, though as an adult I have always been able to get away.  I have circumnavigated twice during the fourteen years we have lived in Evanston.  But I am a creature of the ocean.  A lake is water dominated by land.  A continent is land dominated by water.  70% of the Earth’s surface is water.  I need to know that beyond the horizon land is not fifty miles away, but thousands.

Even though we will probably maintain a residence here for three more years, assuming we live three more years or weeks, Evanston is over for me.  San Diego, which has been more at the heart of my life than any other place on land, is over for me.  I believe Hilton Head is the future.  Carol said something I did not expect the other day.  “You will be restless wherever you are.”  I know that.  I did not know she did, but I should have.  She is intelligent and has been around me longer than anyone else.  I am really old.  I am eagerly looking forward toward the future.

Reading online yesterday I saw three articles on ‘How to remain sane in a world gone insane.’  My thought was:  How can that the world is insane be a surprise?  Have these people not been paying attention?  Have they read no history?  And of course the answer to both questions is a resounding ‘Yes.  They haven’t.’

You don’t even have to read much history to know that the world is insane.  The first half of the 20th Century is proof enough.

I also saw in headings “terrified’ four times, ‘fear’ three, and ‘outraged’ three, as well as articles about how in the United States people who appear to be Chinese are being spit upon and beat up as being responsible for the pandemic.

In the unfortunate event that Carol were not a part of my life, I would provision GANNET for two or three months and go to sea.  From San Diego I might sail a clockwise circle around the North Pacific, over close to Japan, up toward Alaska, down off the West Coast.  By the time I got back to San Diego the first wave of Covid 19 should be over.

I would not be able to provision GANNET as I usually do.   In another example of the herd following my lead, freeze dry food is in short supply.  I thought of buying some.  I will want to have at least a month’s supply on hand in Hilton Head for hurricanes.  Amazon, CampMor, Mountain House are all almost out.  There is so little available it is not worth placing an order.

It should be unnecessary to say that I am glad Carol is a part of my life and I have no desire except to see this through with her.

I suppose we have a mini-social network here with me as the nexus.  From time to time some of you tell me of books or films or music you think I might enjoy and sometimes I share that in this journal.

I first learned of Max Richter from his score for the film, THE HOSTILES, which Tim told me about.  I liked the film enough to put it back on my watch list to view a second time and the score exceedingly.  When last week I chanced upon ‘Return 2’ and wrote about it, Douglas in England suggested other music composed by Max Richter.  I bought and have listened to three albums.   I like them all, but unquestionably the piece that moves me most is ‘The Waves:  Tuesday’ from the album THREE WORLDS:  MUSIC FROM WOOLF WORKS. 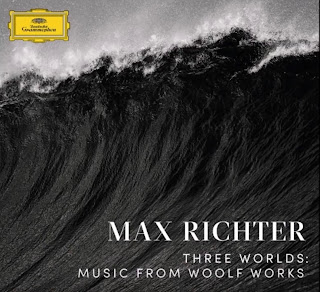 The piece begins with a woman’s voice reciting what I recognized as Virginia Woolf’s suicide letter to her husband of almost twenty-nine years, Leonard Woolf.

Dearest, I feel certain that I am going mad again. I feel we can't go through another of those terrible times. And I shan't recover this time. I begin to hear voices, and I can't concentrate. So I am doing what seems the best thing to do. You have given me the greatest possible happiness. You have been in every way all that anyone could be. I don't think two people could have been happier till this terrible disease came. I can't fight it any longer. I know that I am spoiling your life, that without me you could work. And you will I know. You see I can't even write this properly. I can't read. What I want to say is I owe all the happiness of my life to you. You have been entirely patient with me and incredibly good. I want to say that—everybody knows it. If anybody could have saved me it would have been you. Everything has gone from me but the certainty of your goodness. I can't go on spoiling your life any longer. I don't think two people could have been happier than we have been. V.

She then filled the pockets of her overcoat with rocks and walked into the River Ouse.  She was fifty-nine years old.

The wave of madness grows and swells in Max Richter’s beautiful and haunting music, looming ever higher, until in the nineteenth minute it breaks and engulfs her.  Water washes back into the ocean, leaving behind if not peace at least the absence of anguish.

This may not be your kind of music, but here is a link to a performance.

Some have told me they have not been able to post comments.  I did some research and may have fixed the problem by changing comments from embedded to pop-up.  A test I ran worked.  There may also be a problem with browsers.  I have found that there are certain actions I cannot complete in Blogger and YouTube in Safari that I can in Chrome.  Google owns Blogger and YouTube and Chrome.  If you still have a problem, please let me know.

As someone who has only sailed in Lake Ontario, I would like to know more about your views on great lakes sailing vs ocean sailing. Is the whole experience totally different? Ive never experienced the huge rolling waves of the ocean but there have been times in Lake Ontario where my 22ft sailboat has been thrown around violently by small waves, does that happen often in the ocean? thanks

I bought my first boat while living in the San Francisco Bay Area and sailed out of Berkeley directly across from the Golden Gate Bridge. In strong winds the bridge was a dramatic demarcation. In the Bay waves would be short, steep and close together. Outside the Gate the land falls away and in the same wind the waves would be bigger and farther apart and a boat would sail over them rather than pound into them. Conditions in the Bay were like those on a lake. Outside the ocean is the ocean. This is an oversimplification, but basically true.

Additionally on a lake, even ones as big as the Great Lakes, you are always on a lee shore, not more than thirty or forty miles away. I have been in more gales than I can remember and Force 12 at least six times. I have in the past said eight, but I can no longer account for more than six. Always I had sea room. At least hundreds of miles, sometimes thousands. Had Force Twelve lasted long I would not have survived such conditions on a lake. I would have been driven ashore.

Waves in the ocean are often bigger than on lakes, but I believe they are often reported as bigger than they truly are. This is not to say that GANNET is not often thrown around by waves. She is. And perhaps I am better able to live with that than most. But she is a light cork and has survived several gales, two of which with winds of 55 knots and 20’ seas as officially reported from nearby shores.

If all this makes it sound as though I believe sailing oceans is less difficult than sailing on lakes, I suppose I do. I certainly prefer oceans. It is only a matter of adjusting your mind to a different scale.