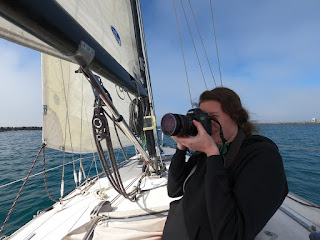 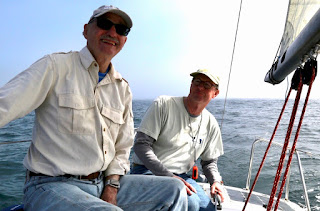 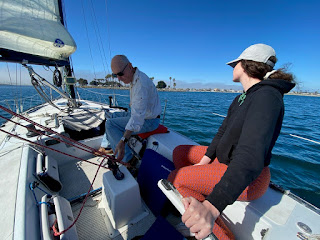 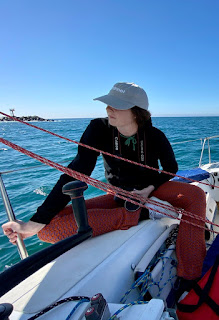 Steve Earley is in San Diego with his aptly named daughter, Grace, and we went sailing yesterday.  That is the first time GANNET has been sailing for months.  The first time she has had a crew of three since I have owned her.  The first time anyone other than me has sailed on her since Steve did back before I began the last circumnavigation in 2014.

Having the luxury of extra hands, I did not fit the usual tiller pilots.  The new ones worked well.  I am unclear about the warranty.

We left the dock under Torqeedo a little after 10 AM with fog that had been thick an hour earlier beginning to burn off.  We raised sails just after leaving Quivira Basin and as we sailed out the entrance channel the fog continued to dissipate ahead of us.

With San Diego’s usual light wind we made three and four knots along Mission Beach and turned around after about an hour and headed back in, docking at 12:15 conveniently in time to walk around to the Royal Rooster for the world’s best tacos.

I enjoyed myself.  I hope Steve and Grace did too.

GANNET told me last evening that she had a good time and maybe we ought to leave the dock a bit more often.

The photos were taken by Steve and Grace.  I thank them for letting me post them.
Posted by Webb at 4:30 PM