San Diego: once around the basin; my garden; to a young man 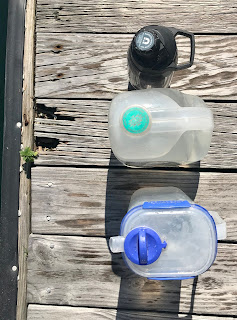 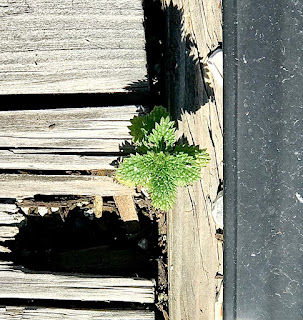 I had considered doing something radical today like going sailing, but the Torqeedo batteries are being recalled for inspection.  The shipping boxes arrived yesterday and were too large to remain long on GANNET, so I packed up the batteries and sent them on their way.  The Torqeedo only requires one battery, but I have a spare.  It is easy to sail off this dock, not so easy to sail back on, particularly when there is no wind, so I pumped up the Avon and rowed a circuit of Quivira Basin on this lovely afternoon.  I haven’t rowed for a long time, too long.

While in the dinghy I noted that GANNET’s bottom is cleaner than I expected after she has been sitting at the dock for so long.  I will scrub the waterline tomorrow.  I also noted three or four nicks in the paint on the starboard side where uncoordinated and/or oblivious kayakers have run into the little boat.

This morning while filling my water bottles as seen above I saw that a garden is growing beside GANNET.  The tenacity of life is impressive.

For two days I have not been following my advice to listen to some Bach every day.  Instead inspired by an article in the NY TIMES by a woman who listened to all sixteen of the Beethoven String Quartets while on the subway in New York and walking to work and by my friend Tim who is a serial listener to all of the works of various composers, I have been listening to the Beethoven String Quartets in performances by the Lindsay String Quartet.  Like many, I prefer the Late Quartets and usually just listen to them.  Hearing all in succession is illuminating and enjoyable.  Not Bach, but close enough.

I have been reading some poetry every day.  Even occasionally my own.  But presently I am reading Thomas Hardy and Pablo Neruda.  This morning I came across a poem by Hardy titled ’A Young Man’s Exhortation’.  The last lines are:

If I have seen one thing
It is the passing preciousness of dreams;
That aspects are within us; and who seems
Most kingly is the King.