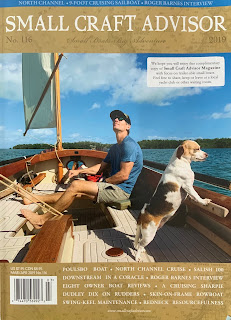 The repair kit from Duckworks arrived last week accompanied by a complimentary copy of SMALL CRAFT ADVISOR.  I glanced at the cover and smiled.  That is my friend, Tom Head, with his crew, Baby, and the photo was taken by another friend, Steve Earley.
I emailed Tom who sent along another photo of my favorite sea dog. 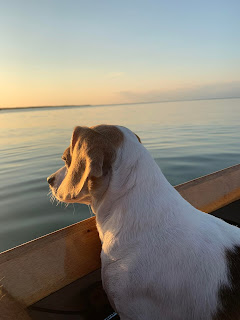 The copy of SMALL CRAFT ADVISOR was full of pretty and interesting small boats.

I thank Larry for sending a photo taken this summer by Brittany Johnson of a shelf cloud that wiped out seven docks at the Racine, Wisconsin marina.
The people on the power boat in the left foreground do not seem concerned, but then they are power boaters. 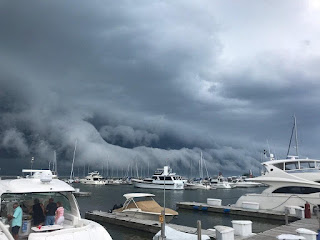 Steve Earley’s career as a newspaper photographer for a Norfolk, Virginia, newspaper is drawing toward a close, but when I saw that the updated track of Dorian shows it near Cape Hatteras on Friday, I expected he will again be heading into the Outer Banks as others are heading out.
He confirmed this in an email and on his Log of SPARTINA which has a link to an entry from a year and a half ago in which he thought his hurricane days are over.

If you go to that earlier entry you will find reference to my own hurricane plans for Hilton Head.  Steve’s hurricane days aren’t over.
There is a mandatory evacuation for Hilton Head.  I am glad that GANNET and I are not there.
Posted by Webb at 10:48 AM