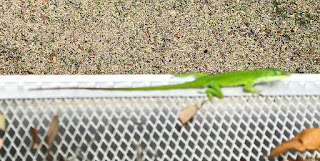 I thank Hugh for pointing out that while they are sometimes called chameleons, the small lizards that frequent our deck are anoles.  There are no true chameleons on this continent.
This is the smallest one.  His/her body is only two inches long, not counting the tail.
They are rather endearing little creatures.
I’m not sure what they are doing up here, but am pleased to have their occasional company.
In the above photo my phone focused on the ground below.
In this one it focused on the anole, but missed his head. 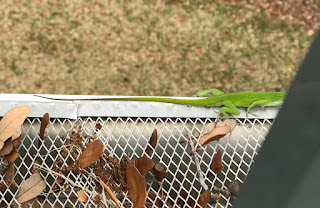 He let me get the phone to within about three feet of him.  Closer and he started scurrying, as I would too if something hundreds of times my size got that close.

A few weeks ago in a supermarket in Evanston I saw boxes of what looked like tiny yellow tomatoes on a shelf of berries.  I picked it up and found it labelled ‘Golden Berries’ and in smaller and difficult to read print, ‘a.k.a.  Cape Gooseberries’.
You may be aware that Chinese Gooseberries have been successfully rebranded as Kiwi Fruit, though I expect not in China.
Apparently gooseberries are not marketable as gooseberries.  I am not sure why.
I did some research and learned the the ‘Cape’ in Cape Gooseberries is the area around Cape Town, South Africa.
I found ‘Golden Fruit’ at the supermarket here yesterday and again bought some.  They have a piquant, refreshing taste, slightly sweet and slightly tart.  I like them and would have bought them even if they were labelled gooseberries.

In certain light the Spanish moss turns to lace and the sunset into stained glass windows.